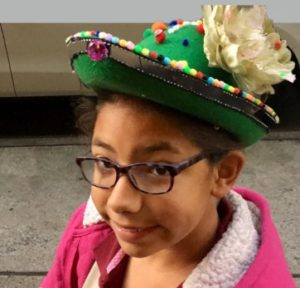 Co-founding the NYC Autism Community is very personal for me. I am the proud father of an autistic 11 year old girl who is my pride and joy. My daughter has Asperger’s.

Our journey began early on in our daughter Katarina’s life. We knew she was different when she used to listen to a lyrical CD and dance and spin around like a top yet not get dizzy. Kat would also never complain about pain if she fell, hurt herself, she virtually never cried. She also wasn’t terribly verbal until 4th grade.

I tell this story because I want ALL parents to be aware that if they think their child exhibits even a few of the dozen or so autistic characteristics, even as early as a year old, get your child examined. They are FREE early intervention programs offered by the Department of Health (ages 1-3) and even the Board of Ed (ages 3-5). Yes it’s FREE folks—and even intervention services are free.  As early intervention and remediation of Autism is so important—it can even reverse or reduce symptoms—and there are free services available out there, take advantage of them!!!

In spite of all the indicators and the whispers from some family members, no one uttered the dreaded “A” word for autism, at least that’s how we characterized it. It simply never dawned on us that our daughter was autistic. This was 2009-2010 when autism was not on everyone’s minds like today.

So, a little bit in denial and also not taking the initiative to have Katarina checked out formerly (we actually just sort of shrugged and liked the fact that she was “different’), off to school she went. The fact she tested well and got into an advanced gifted and talented program at age 4 energized our thinking that Kat was OK, after all, she was smart and smart enough to test well.

Fast forward 2 years later, she’s fidgeting in class, not controlling her body, and not being effectively social and her first grade teacher, who had a background in Special Needs Children, wrote a letter articulating Kat’s condition to the school’s principal, which we later received in the mail and it was now necessary to get Kat officially assessed with a behavioral psychologist.  The report came back with the diagnose that Kat had ADHD. Well at least now we now know what it is (but not what to do about it).

We took Kat about six months later to another behavioral psychologist who also evaluated Kat but in a more intimate one on one setting. Afterwards she came back with “Your daughter doesn’t have ADHD, she has Asperger’s.”  It thought, “What’s that? It sounds like a type of gum.”

Less than a year later, after summer camp where we enrolled out daughter in a special camp just for highly functional Autistic kids, the verdict came back: “Kat is too disruptive in class. You need to explore drug options.” I fought this for months, maybe years, but now was resigned to consider it. If it helped my daughter, that was what I was committed to.  After three years, fast forward, my daughter is skinny, doped up and generally maudlin but she got good grades. We as parents were more fixated on her academics than her socialization challenges. We didn’t know the true extent. We knew she had few friends in school but I guess we were expecting this to change. It didn’t.  By the time Katarina graduated from elementary school, when I picked her up on her last day of school, she was in tears.  She just wanted to leave without saying goodbye to anyone. When I asked “Don’t you want to say good bye to anyone?”

She replied, “Daddy for six years nobody wanted to be my friend.” I will take those words to the grave. I consoled my daughter, we went to McDonalds and had some fries and an ice cream cone and I contemplated where I had gone wrong. In truth, Kat's classmates had tried to befriend her and always treated her well. But most had stopped trying to be her friend because when they tried, Katarina did not pick up on it, so after awhile they just accepted her for who she was but let her be.

We now knew that Kat’s challenges with her socialization, not picking up on social queues of other classmates, acting below her age and not respecting other’s personal space had all created a huge social barrier for her. Now how do we come up with ways to help her with this? On top of that, Katarina complained that the drugs she was taking, the stimulant Adderall, made her dopey and was the cause of her socialization problems because it robbed her of her normal spontaneity and creativity—who she really is.

So we took her off Adderall as she went to her summer camp again, and kept her off it as the school year began.  Kat gained 25 pounds and became the rambunctious, effervescent person we knew before. But now, the challenges that the Adderall was addressing have come back. And there you have it. On to the next phase in her life, middle school, a work in progress.

Co-Founder and my partner in the event, Melissa is an expert special needs child care provider who will speak on several autism related topics. Melissa grew up on the Upper West Side and has a background as a teacher in the NY school system.

Melissa’s teaching career began as a substitute teacher, licensed to teach Social Studies, assigned to teach Algebra, at the High School for Graphic Communication Arts in Manhattan. In 2003, she moved abroad to Paris, France where she founded a school that provided tutorial services to the local international population. Returning to New York I taught English, Social Studies and cross-curricular activities at a Manhattan private school for twice exceptional students. Melissa has also had the privilege of serving as a District 75 teaching fellow in 2016.

Melissa provide one-on-one lessons, coaching, and tutoring, specifically tailored to an individual's needs, working closely with the family, school and other providers when necessary.

Melissa's teaching philosophy is that no one fits in the same box. Well-worn paths may not be the right ones for your child. Let's take "the road less traveled by" and transform learning from a source of anxiety to a source of JOY. Amen to that!

The Reason Behind Our Community and Our Events

Parents with autistic children often feel uncomfortable  going out in public because of the concerns of the behavior of their child will call attention and neuro normal folks would be aghast. Families become self-conscious. Families with autistic children also sometimes feel that they are in it alone, and the pursuit of information on autism, with all the different resources and the tendency for each autistic child to be different, meaning lots of trying different strategies, treatments and interventions until you find one that works. It’s tough, tough, trying work.  It can sap the strength of parents.

We want to create a space where families with autistic children can come to an event with their kids and speak openly with other like parents and exchange ideas and strategies. And also where families can find expert resources and talk to some about some of the issues they are facing so they don’t have to feel alone.  We aim to help families celebrate their autistic children for their uniqueness and for being different hosting events, indoors and outdoors with safe events that inspire their children.

Our first event is on Sunday November 19th from 3PM to 7PM and the theme is, good conversation, fellowship, games for the children with some (free) appetizers, drink and screening of a movie that is a stirring story of accomplishment for autistic children.  We’ll have a raffle of some prizes and a panel of autistic providers to provide information and encouragement.

For future events we plan trips to museums, animal farms, technology centers, dance studios and whatever our community sees fit!

© No copyright information has been saved yet.